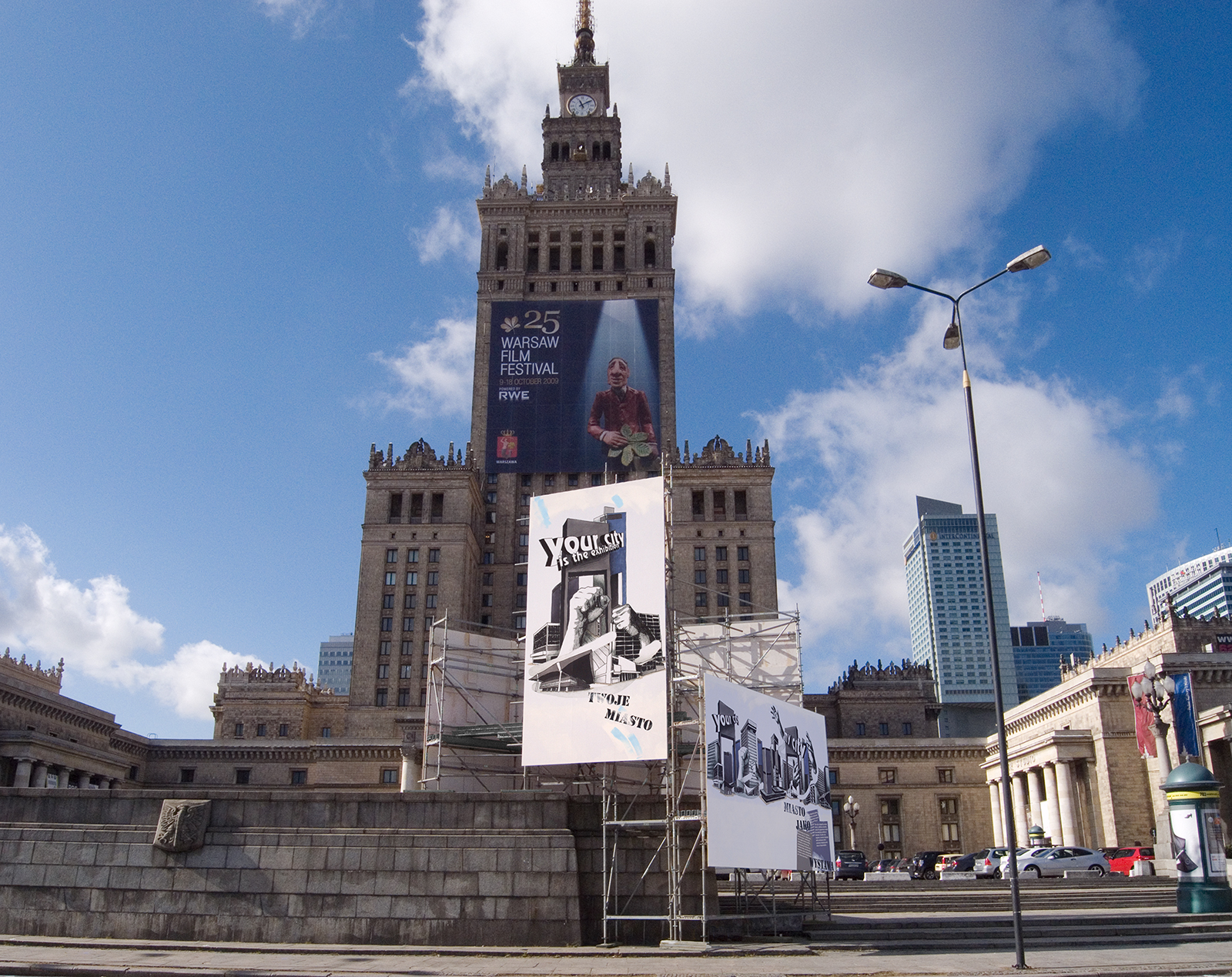 Museum of Modern Art in Warsaw

The Big Argument is a project accompanying the program of “Warsaw Under Construction”. Using a billboard cluster on the seats of honor in front of the Palace of Culture in Warsaw, Daniela Brahm underlines the impetuous and complex character of conflicts evoked by attempts to manage and conquer public space by groups of conflicting interests. The eight-meter high installation refers, among others, to the future role of the Museum building which, aiming to order the public sphere of the city centre, becomes the subject of disputes and antagonisms itself. Brahm imitates the language of the omnipresent advertisement – the large-format billboards and ubiquitous information boards and signboards, using them at the same time as a carrier of activist announcements concerning disputes among the users of the Parade Square.

She emphasizes the violence and complex character of conflicts that accompany the development and grabbing of public sphere by groups and communities driven by contradictory interests. At the same time, Brahm defines the city as “the biggest exhibition in the world”, treating art as a kind of magnifying glass, through which we look at pending urban, political and social processes.

In a world where almost everything has already been designed (“from jeans to genes” – as Hal Foster puts it in a well-known essay, Design and Crime), there are still places that stubbornly resist the regular planning, the enclaves of architectonic anarchy, where anything might yet be designed, to the benefit of the residents. For the time being, Warsaw remains such a place.
(text by Sebastian Cichocki, curator at the Museum of Modern Art in Warsaw) 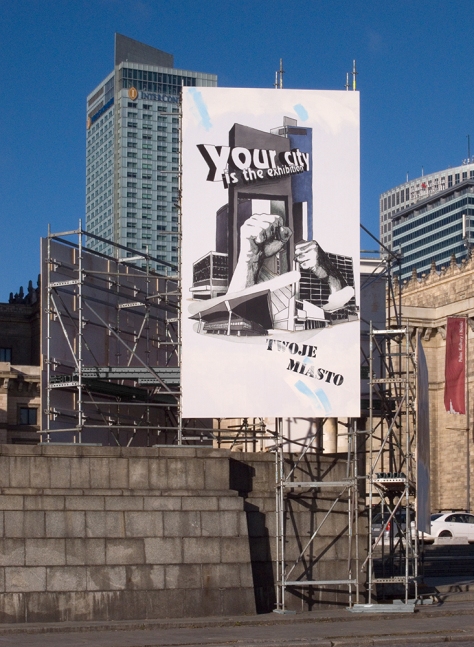 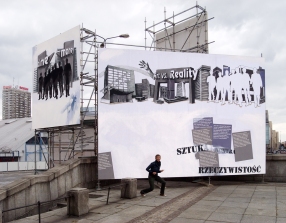 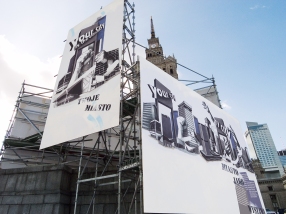 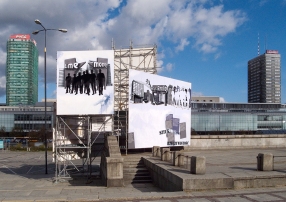 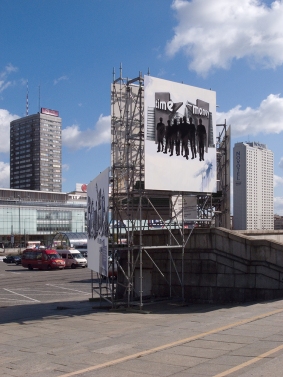 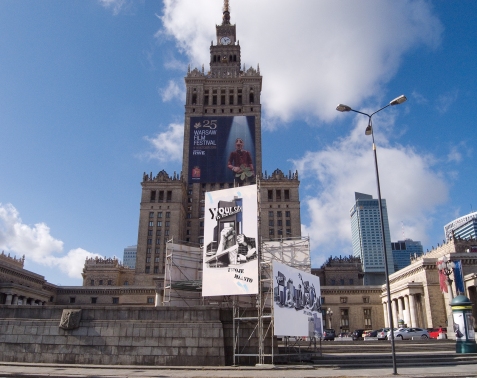 Museum of Modern Art in Warsaw

The main exhibition of this year’s edition of the festival WARSAW UNDER CONSTRUCTION presents various faces of Plac Defilad shaped by history and transformation processes. The exhibition will look at this centrally located public space in Warsaw through the lens of activists, urban planners and architects; it will offer an account of several decades of planning and heated debates.

In her work Daniel Brahm imitates the language of urbiquitous advertising – large-scale billboards, omnipresent information boards and signboards – while employing it at the same time as a carrier of activistic communication concerning the conflixt between the users of Parade Square. The Big Argument, a project from 2009, was commissiones by the Museum of Modern Art in Warsaw for the first edition of the festival WARSAW UNDER CONSTRUCTION. It is the result of the artist’s serveral visits to Poland, during which Brahm created a hundred drawings, photographs and models. These drawings will be shown in the exhibition for the first time. Brahm highlights the fierce and complex character of the disputes that accompany the development or appropriation of public space by groups with contradictory interests or by developers’ capital indifference to social needs. At the same time, the artist defines the city as „the largest exhibition in the world,“ treating art as a magnifying glass, which serves to observes the unfolding urban, political and social processes. (text by Tomasz Fudala) 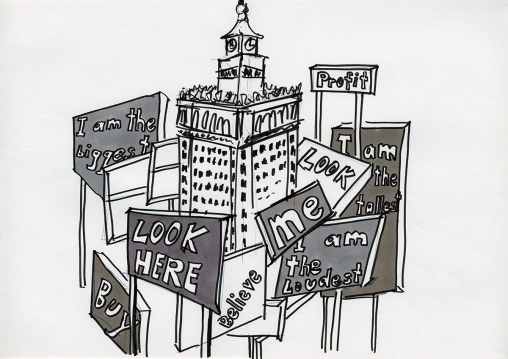 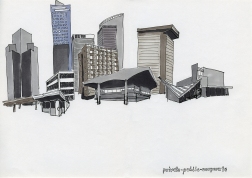 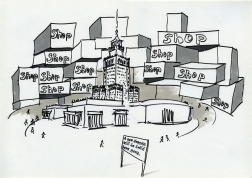 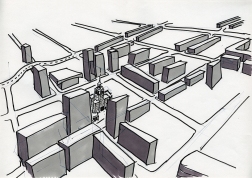 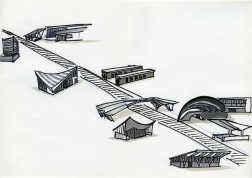 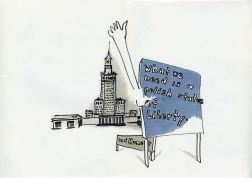 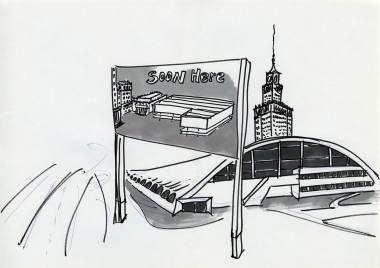 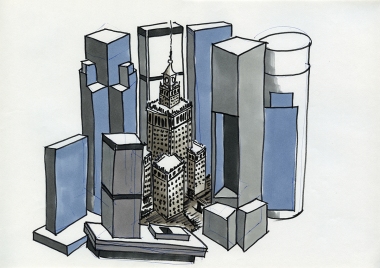